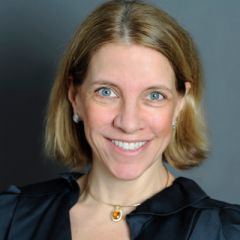 As a real estate M&A banker at JP Morgan and Lazard Freres, Farran worked on all aspects, from initiation to execution, of over $4 billion of office, hotel and apartment transactions for public and private real estate investors, including Lazard’s Real Estate Fund. Subsequently, as a commercial real estate broker at Studley and Cushman & Wakefield, Farran represented tenants, including non-profits, private equity and law firms. Earlier in her career, Farran was an analyst at Lehman Brothers in project finance. In addition, she served on the Executive Committee and as the Chief of Staff of the Royal Academy of Arts in London.

Farran has served as a board member of Manhattan Community Board 6, New York Landmark Conservancy, Drama League, Sir John Soane Museum, 470 Park Avenue and on committees of the Museum of the City of New York, School of American Ballet and The Brearley School.

Farran attended The Brearley School, Trinity College and Wesleyan University from which she received her BA with honors in Economics and Political Science. She also received her MBA from Harvard Business School. Farran, her husband and three daughters split their time between London, New York City and Park City, Utah.