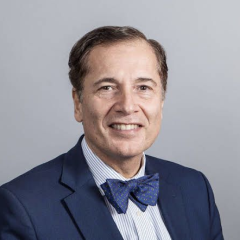 Dr. Dimitri Azar, M.D., MBA, in 2017, joined Alphabet Verily Life Sciences as Senior Director of Ophthalmic Innovations (including diagnostic, therapeutic, drug delivery and surgical innovations). He is Distinguished Professor of Ophthalmology, and served as Dean of the University Of Illinois College Of Medicine from 2011 to 2018. Previously he was Professor of Ophthalmology and Director of the Cornea and Refractive Surgery Services at the Massachusetts Eye and Ear Infirmary and Harvard Medical School.

Dr. Azar has been an Independent Non-Executive Director of Novartis AG Since February 2012. He serves as a Member of Verily Advisory Board at Verily Life Sciences LLC.

He is an internationally recognized ophthalmic surgeon and prolific researcher. He has been named one of The Best Doctors in America and one of the Castle Connolly Top Doctors in America annually since 1994. He has held multiple committee positions with the American Academy of Ophthalmology, and was board member and Vice President of the Association of Research in Vision and Ophthalmology. He is a member of the American Ophthalmological Association and sits on the Board of Trustees of the Chicago Ophthalmological Society and the Chicago Medical Society.

He has published 450 papers and chapters, 22 textbooks and 38 patents. His work on Matrix Metalloproteinases in wound healing and angiogenesis has been continuously funded by the NIH R01 award since 1993. He has received multiple leadership awards, including the Lans Distinguished Award from the International Society of Refractive Surgery and the Barraquer and Lifetime Achievement Awards from the American Academy of Ophthalmology. He holds a medical degree from the American University of Beirut, Lebanon, and an Honorary MA from Harvard University and an Executive MBA from the University of Chicago, Booth School of Business.