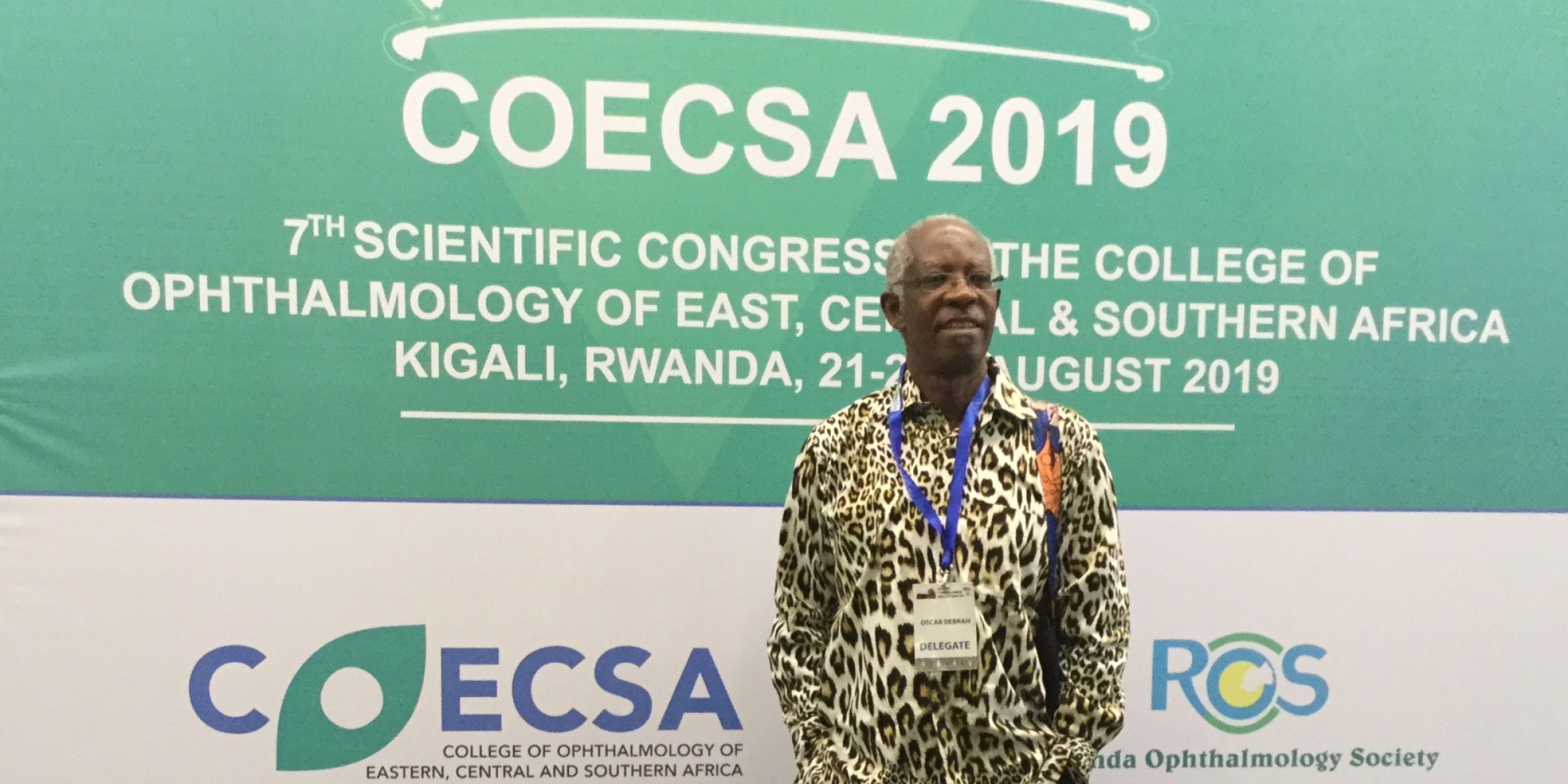 Dr. Oscar Afari Debrah began his career in medicine after graduating from the University of Ghana Medical School, Legon in the early ‘80s and completed his internship at the Korle Bu Teaching Hospital one year later.

He then began his role as Medical Officer at the Presbyterian District Hospital in Bawku, in the Upper East Region of Ghana. Ophthalmology, he writes, was the last thing on his mind since he barely spent four weeks in the Eye Department throughout his six years of medical school. However, that all changed when the Medical Director at Bawku, who was also the ophthalmologist in-charge, asked Dr. Debrah to visit the department when he saw Dr. Debrah “squeezing” his face to look at a distance object. When he received his first pair of glasses and left the office, “the world looked so beautiful!”

Shortly after receiving his first pair of glasses, Professor Dr. Allen Foster from the International Centre for Eye Health (ICEH) visited the hospital to give lectures to the nurses in the Eye Department. Out of sheer curiosity, Dr. Debrah attended those classes. He found them to be illuminating and Dr. Foster “made ophthalmology learning seem so easy!” That was when he decided to pursue a career in ophthalmology.

Dr. Debrah began his journey with a three month training at the Lunsar Eye Hospital in Sierra Leone. Upon returning to Bawku, he joined the eye unit for another year, before embarking on a one year course to earn a Diploma of Ophthalmology from the University of Zimbabwe, Harare. Following his Diploma, Dr. Debrah pursued his Masters in Community Eye Health at ICEH in the University College of London. He returned to Bawku to head the Eye Unit where he carried out outreach services to all the districts in the Northern and Upper East and Upper West Regions of Ghana, as well as Christian Blind Mission (CBM)-sponsored Rehabilitation Centres in Northern Togo and Southern Burkina Faso.

In 2006, Dr. Debrah was appointed the Head of Eye Care of the Ghana Health Service and the National Coordinator for Prevention of Blindness for Ghana. He remained in this position until his retirement in 2016. During his time in this position, Dr. Debrah had some interactions with HCP but as he wrote, he had “no idea [he’d] be working with [HCP] in the future.” Yet, he remembers speaking at the opening ceremony for the Eye Department at the Komfo Anokye Teaching Hospital (KATH), a collaborative project among HCP, USAID, and KATH. Perhaps a foreshadowing of what was to come?

Presently HCP is in partnership with twelve institutions in Ghana, including the four Teaching Hospitals of KATH, Korle Bu Teaching Hospital, Tamale Teaching Hospital, and Cape Coast Teaching Hospital, which Dr. Debrah coordinates. HCP has also signed an agreement with the Director General of the Ghana Health Service to form the National Cataract Outreach Programme (NCOP) to carry out high volume cataract surgical outreaches throughout the country. As Dr. Debrah writes, “Hopefully this year we should be able to do about 10,000 cataract surgeries. This will go a long way to reduce the backlog of cataract in the country! The challenge is huge but with support from all the partners we should be able to do even more next year.”