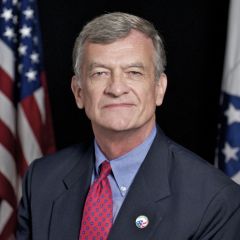 A native Buckeye, George Like holds a master's degree in Agricultural Economics from The Ohio State University and briefly taught in that system. As an undergraduate at OSU, he studied tropical agricultural at the Punjab Agricultural University, Ludhiana, Punjab, India.

Like was a Peace Corps Volunteer in El Salvador from 1977-1979 where he was involved with agricultural research and special project activities. After his Peace Corps service, he joined the US Agency for International Development (USAID) where he worked in a variety of positions and activities, including natural resource management, agriculture, urban planning, health and education. He served with USAID in Guatemala, Indonesia, Belize, Panama, Nepal and Washington, DC.

Like also worked with USAID as a Field Program Officer at Forward Operating Base Kala Gush in Nuristan province, Afghanistan. He returned from Afghanistan in August 2010.

Like met his wife, Debra while both were Peace Corps Volunteers in El Salvador. They reside in Fairfax County, Virginia and have two college-aged sons, Alexander and Andrew.